From 1990 to 1994 Rinaldo studies at the Art Center College of Design (Europe). He is awarded with honors in communication design, cinema and storyboading. Following his studies, he creates his own company, “WIDE creative laboratory” and works for international companies such as Swatch, Nestlé, Salomon Snowboards, Bacardi Martini, IOC (International Olympic Committee)… During this time he also starts writing and directing his first video clips for local and international bands such as The Young Gods.

In 2003 he decides to go back to his first love : acting. For three years he studies in Paris at the famous “Cours Florent”. Follows a master class in story telling (STORY, Robert Mac Kee) Meanwhile he writes, directs and acts in 3 short movies and plays in different thatre plays.
In 2011 his first documentary is released “ Michel Corboz, le combat entre le vrai et le beau” (Michel Corboz, the fight between truth and beauty). Since then he has been working on several projects in advertising, video clips, short movies, documentaries and is preparing his first feature film. 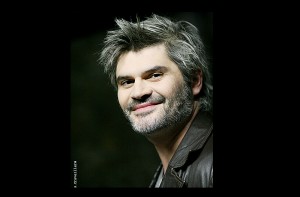